Life had not been easy for Harry Pilling, born in Bolton in 1903.  The carefree days of childhood were cut short by the premature death of his father when the boy was only twelve and it soon dawned on Harry, an only child, that he would have to adopt the mantle of breadwinner, and as soon as possible.  So, on his 16th birthday Harry started his own import/export business in 1919, The Astley Dye & Chemical Company in Astley Bridge, Bolton. And the ACDO company was born!

Harry’s first venture into international commerce was an unmitigated disaster, and so looking around for a more saleable commodity, the first line ever produced by ACDO was a soap known as XL.  However, Harry enjoyed a particularly fortunate stroke of luck.  He found a chemical called Sodium Perborate, which he mixed and packaged as “Adco”, (but quickly re-named it Acdo).

Acdo was to revolutionise washdays. The Acdo tablet was shredded into water with a grater, and added to an equal amount of shredded soap.  The result was a wash that required no rubbing or scrubbing to remove stubborn stains.  The Sodium Perborate helped to lift out the dirt, and, as the bubbles contained oxygen, a mild bleaching effect was also obtained. The end result – a wash that could be completed in 20 minutes without the hard work, little wonder that Harry’s first advertising slogan was that “Acdo makes washday a holiday!”.  Church and school halls were booked for washing demonstrations, and housewives were invited to bring articles for washing.  On the retail front, local grocers were also offered boxes of Acdo on sale or return to cope with the ever increasing demand.

At this stage, the company comprised only Harry and his mother, who were still preparing and packaging the soap entirely unaided on their kitchen table but demand soon reached a level whereby the modest production facilities afforded by a little terrace house could no longer cope and, in 1921 Harry purchased an ex-army tin Nissan Bow hut located nearby and four staff were hired to help with production. The business took off and moved into a wooden building, and the staff count rose to 10 and sales people/agents were taken on to spread the news of ACDO to more distant parts of Lancashire and over the Pennines to Yorkshire.

In 1928 and at the age of 25 Harry moved in to custom-built premises in Mallison Street, Bolton and these remain as the company’s head office to this day, albeit in a very changed and greatly extended form.  The 10 years from 1928 to 1938 saw phenomenal growth at ACDO, but the clouds of conflict gathered over Europe and, by 1939; the country was once again at war. 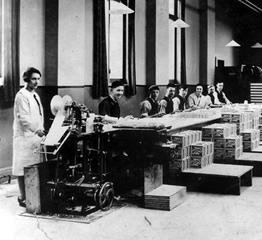